Last October 28, Gerald Tabios, a Filipino living in New York City wrote me. The father of two has been an avid reader of Bleachers Brew and thought he’d like to share a story of his about his passion for running and his participation in the upcoming New York Marathon that is 14 hours from now.

Gerald was born in Malaybalay City and moved to NYC in 2001 for a better economic opportunity. Tabios graduated from Xavier University (Ateneo de Cagayan) with a degree in engineering but currently works as a chauffeur for a wealthy Manhattan family. Said Gerald, "I am an avid sports fan and loved to watch PBA during the 80's. I've read your blog Bleachers Brew and fascinated about your articles including the ones about Filipinos in New York Marathon. As a proud Pinoy, on November 1, 2015, I will be joining again for my 11th New York marathon."

We conducted an interview with Gerald a few days ago and here’s the transcript of that chat.

Rick: How long have you been running?

Gerald: My fondness for running started when I was in high school not as an athlete but simply for the love of it. Later, I joined the annual MILO 10K Runs in Cagayan De Oro City from 1994-1997. In 1995 & 1996, I signed up for a longer distance event by joining the The Tri-City International Marathon 25K Race in Cebu City.

When my family and I migrated to New York in 2001, I signed up for New York Road Runners (NYRR) races in Central Park. Three years later in 2004, I signed for the New York Marathon. The New York Marathon has been always my dream race since high school. I had a collection of used and old Runners World magazines way back that I found in a PX store in Cagayan de Oro City.

Rick: About the NYC marathon, you said this wasn’t your first…. ?

Rick: What is your pre-race routine?

Gerald: I don't have much of pre-race routine. All I do before a race is find ways to stay calm and to focus. I try visualizing what the race route and conditions and always expect the unexpected. I am more into an "old school" runner,  I try not to accesorize during my races by not wearing headphones, GPS and etc.

Rick: Let’s talk about life back home in the Philippines.

Gerald: I was born in Malaybalay, Bukidnon in Mindanao; the youngest of six siblings. I attended Xavier University in Cagayan de Oro City and graduated with a degree in civil engineering. After I got married, me and my wife, Donna, ran a small business but decided to migrate to New York City in 2001 in search of better economic opportunities.

Now, I’m a happily married dad with two kids ages 12 and 9 and presently work as chauffeur for a Manhattan family for eight years. 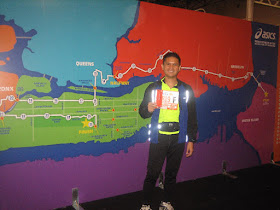 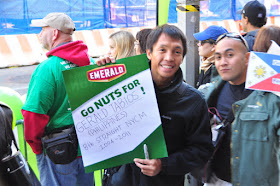